This week, as I was driving up my driveway, I smelled the sweet smell of jasmine permeating the air and I thought to myself, “Here it is! Spring is coming!”  For us Persians, Spring has a cultural significance since the first day of spring marks our new year.

So what a better way to ring in the new year but to head out for more adventure for the week.  On Thursday afternoon, I was invited to view the Broad Art Foundation in Santa Monica.  Eli and Edythe Broad are two of the foremost philanthropists who have been collecting contemporary art for decades. The Broads established their foundation in 1984 as a way to keep these works in the public domain and now this extensive collection is cited to be of the best in the world.  So you can imagine how amazing it was for me walk through the art on display on the different levels of the foundation building. 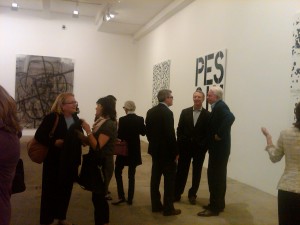 But my week didn’t stop there. This weekend LACMA hosted a Persian New Year Celebration in collaboration with the Farhang Foundation.  Hundreds of fellow Iranians were strolling in the courtyard, viewing the traditional Nowruz table decorations, watching traditional folkloric Persian dance, or listening to a free concert from the popular Dang Show group. (I will be writing a review of their work soon)  I even had the chance to sneak a look at the Firooz Zahedi photographs of Elizabeth Taylor visiting Iran in the museum gallery.  These photographs were truly stunning and no matter if Ms. Taylor is hiding behind a chador, you can still spot those violet eyes anywhere! 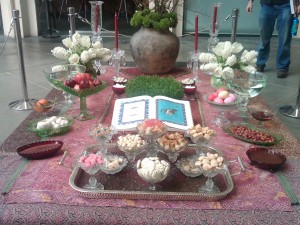 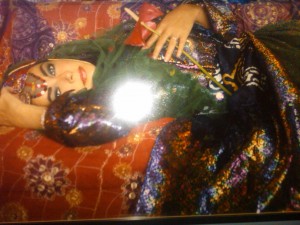 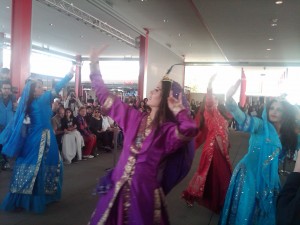 Our final stop for the day was the dinner held for Hammer Museum Circle members at the studio of talented artist, Elliott Hundley.  It is a real privilege to be able to visit the work and living space of artists and this one was no exception.  Huge collages and artwork in various stages of development hung on the walls and the artist himself chatted and mingled with his guests.  After dinner was served, we walked over to another artist space (Llyn Foulkes)  where we not only saw his artwork but got the treat of hearing him play a few songs on his very eccentric and absolutely whimsical musical machine. I have to say, I thought I was dreaming the night away. 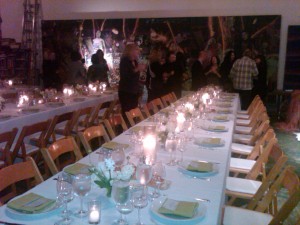 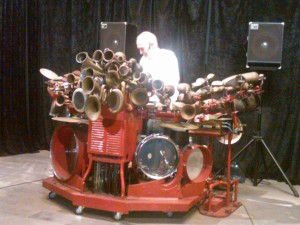 And by 10pm, when we finally came home, I was once again greeted by my jasmine blossoms.  Spring is here in full bloom! Happy New Year to all!

Many New Yorkers used to say that there is no art scene in Los Angeles. This is farther from the truth!  I am not exaggerating by saying that in a given week I may get around 3 to 4 announcements on different exhibitions taking place around town….and this is just the tip of the iceberg.

And what was even more amazing is that in the past week, I managed to scale a part of that iceberg.  Here is a glimpse of some of the great exhibitions going around town.

ACME Gallery is one of the prestigious galleries in the city and it was showcasing Jennifer Steinkamp’s video installations.  A group of my friends visited the gallery to meet with the artist herself and hear about her newest project.  A very laid back and approachable artist, she took us from one room to another to tell us of her inspiration.  On a personal note, I love one of her works of a computer animated tree that goes through the four seasons, shedding its leaves in the winter, blossoming, and swaying with the wind, and the leaves turning colors as time elapses.  I had seen this particular piece at a UCLA art show and fell in love with it. Just imagine, a couple of months later I saw this very piece displayed in the foyer of one of my friends! It is a magnificent sight. Here is a link to Jennifer’s show:

A few days later I was invited by LACMA to try their new restaurant–Ray that has been designed by the famed architect Renzo Piano.  The restaurant is named after Ray Stark, who was a famous producer and former LACMA Trustee.  So I met up with a friend and had a tasting of the Mediterranean inspired food that the Patina Group had created.  The food was absolutely wonderful with a great selection of salads, pastas, and entrees. 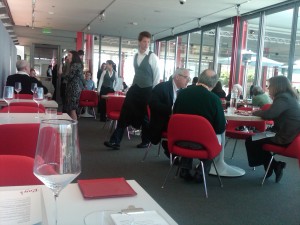 Of course, after lunch we headed out to see the Larry Fink Photography exhibit in the museum. Given that it was Oscar weekend, much had been written about this Vanity Fair Photographer who has captured images of celebrities and society people at the Vanity Fair Oscar Parties.  For one thing, Larry’s photographs certainly don’t flatter the elite.  By no means are these glossy and glamorous pictures of actors and actresses.  That point of view I like, but to tell you the truth, this exhibition left me uninspired. Here is a link to the show.

Two days later, I went to Soraya Nazarian’s sculpture exhibition.  Does the last name sound familiar to you?  Yes, Soraya is my talented mother-in-law, who has been sculpting for the past 25 years.  Words don’t describe how I felt when I walked into the gallery and saw her work displayed all in one space.  She simply does magic– she takes such a hard medium such as stone and transforms it into something alive and full of emotion.  The opening was a big success with lots of art aficionados and friends mingling and talking about the pieces on display. 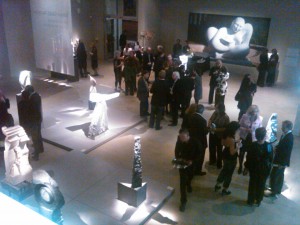 Finally, the next day, as I was having a meeting in Century City, I had 45 minutes to spare and walked over to the Annenberg Space for Photography.  It had been weeks that I had seen banners of their new exhibition displayed all over town.  And just last week, I had run into philanthropist Wallis Annenberg herself who was raving about the latest photographs that are on display in her space. 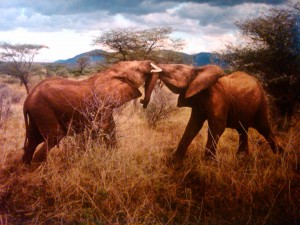 This is a must see exhibition if you live in Los Angeles. “Extreme Exposure” documents the work of 5 photographers who dare to explore the most dangerous and remote environments to capture pictures of nature.  A photograph taken by a diver in the frozen water of Antartica to capture sea lions was magnificent.  Then there were the supernatural pictures of volcanos erupting, and wild, nearly extinct animals in India or Africa.  What is most special about this exhibition is that these rarely seen moments are accompanied by the photographers’ commentary in a 10 minute video clip.  This is a perfect show to take kids as well! Here is a link to this show:

So this was a sliver of my week in the art scene.  Just this week I received invitations to the Ed Ruscha Show at the Gagosian and the Broad Art Foundation.  So, there is more to come! But comes to show that Los Angeles has more to offer than some may chose to think! 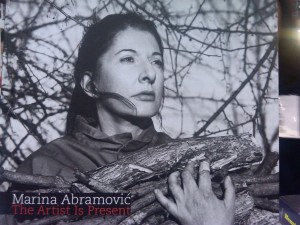 David, my husband, says that when I am on a mission, there is no stopping me.  Well, he knows me best! Do you think after taking a red eye from Los Angeles and having a couple of meetings right after I land, I would go to my hotel room to rest? Are you kidding? I went straight to MOMA, where I was looking forward to seeing 2 exhibits in particular: Henri Cartier-Bresson’s photography and Marina Abromovic’s performance art.

As an avid photographer and a big admirer of Bresson’s work (I once gave a first edition of his photography book to a dear friend of mine), I was just thrilled to see the range of his photographic work displayed at the museum.  His portraits and the pictures taken when traveling throughout China, Mexico, Spain, Morocco, and even Iran was just breathtaking. His eye is impeccable and his sense of timing is just right. He managed to capture the essence of the moment, and the prevailing feeling of the situation in such a masterly way. No wonder he is called the best photographer of the century.  Here is a little article my friend, Patricia Zohn wrote about this exhibition in the Huffington Post.

Abromovic’s performance art is other-worldly. If one doesn’t understand what this grand artist is aiming for, one would think it is masochistic and  at times even pornographic. Be ready to see nudity and lots of it in this show. I think Abromovic is a remarkable artist, pushing the boundaries of courage, conceptual art, while having the viewers be participants in the art.  The funniest moment for me was when I was getting ready to go through this entrance to a hall, where a nude man and woman were standing by.  There is no other way to get into the exhibition hall but to squeeze past these two naked people, which was the entire point. I was 5 feet away from the man and woman when my phone rang! My friend asked me if she had called at a bad time. I paused and said, “Well, I am looking at two naked people right now. Can I call you back?” Of course, we were both hysterically laughing at this awkward moment. And of course, I explained to her that I was at the MOMA exhibit!  Here is an article and some clips of the Abromovic exhibition:

I guarantee you, it is an experience.

My third art stop was visiting Leyla Taghinia Milani Heller’s Gallery.  When I was in NY in August, I got a chance to visit the Chelsea Museum’s Iranian Art exhibit that was curated by her. I also read a glowing article in the New York Times about Leyla and her gallery. So of course, I went to the gallery in the summer. But this time, I was lucky to catch her in town, as she is often traveling for art fairs.  She is no doubt one of the most important dealers in Iranian Contemporary Art, and her gallery was showing an exhibit of Shoja Azari’s work.

I have been a fan of Shoja’s work and he is getting a lot of press on this new exhibit.  Here is the NY Times Article on Shoja and his latest work:

There is no substitute to having an artist himself explain his work. I was fortunate that Shoja was at hand in the gallery.  Shoja talked about each piece at length, explaining the roots of his work and his inspiration in his characteristically friendly and warm manner.  What strikes the viewer is his straightforward iconoclastic gesture, the replacement of the the face of ordinary women for the image of saints in Shi’i iconography. This video instillation projected onto the icons makes these faces actually come alive and make subtle motions.  As I told Shoja myself, “I can’t take my eyes off these images. The faces truly come alive.”  There is a deeper philosophical and political undertone to his art, which in reality creates a dialogue for Iran’s tradition of using sacred iconography and for the current political involvement of women in the country. These images surely stayed with me long after I left the gallery, which proves that he has found of wellspring of powerful images to construct his form of expression around.