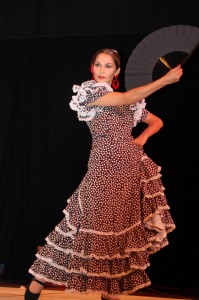 So much has happened since two weeks ago. As I finished my final leg of speaking engagements in Arizona and Los Angeles, I geared up with days of practice for my upcoming flamenco recital.

Yes….you guys have all heard of my great love for flamenco before, and now I was put to the test in front of 200 people!  So, you must assume that since I am in front of crowds I wouldn’t have a problem with performing. But let me tell you–speaking and dancing are two different animals.  To think this was the first real formal dance class I ever did, and I had no idea what I had gotten myself into.  What I soon realized is that it takes great discipline to learn any new skill, and it really is hard on the ego to start something new when you are older.

But I have no regrets. I really LOVED the whole process. I learned so much about this soulful and passionate dance.  What I learned is that flamenco is highly improvisational yet structured in beats.  The performances are in reality a collaboration between the dancer, singer, and the musicians (while on stage, the dancer gives signals as to what she will be doing to alert the musicians and singers).  The lyrics of the music are moving and full of emotion.  While I was in college I had studied Frederico Garcia Lorca’s works, but it wasn’t until I started studying flamenco that I learned that he was deeply involved in writing the lyrics and poetry to his country’s folkloric dance tradition. 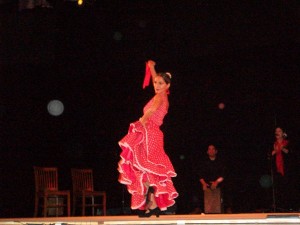 It was pouring the night of the recital.  Actually it was one of the worst storms LA had seen in years, and I felt especially bad that friends and family were driving through flooded streets to attend.  But, once I was on the stage and saw the familiar faces, I was actually comforted by their presence.

Our first dance, was a group dance–the boulerias.  This is no exaggeration. We messed it up.  Our footwork was out of step and our moves were not in unison. Some forgot some steps, some ended their dance sooner, while others just looked at each other mystified.

I thought to myself, if this is how it will be for the rest of the night, we are in for a dreadful show.  Thank goodness, we all redeemed ourselves in the following dances.  I must say, it was a bit unnerving to do a solo right after the boulerias, but it actually turned out well.

So, what did I like most about the experience? Well, aside from the super beautiful costumes I got to wear (I am a clothes horse), it was the feeling that took over me while I was dancing.  Honestly, for a long time I have wanted to learn flamenco, but as much as I was attracted to the movements, I was intimidated by its complexity.  That night I can say I was proud that I did something that I loved and I took a chance.  This comes to show that it is never too late to learn something new–it is all about our enthusiasm with which we approach a task, or better yet, life!