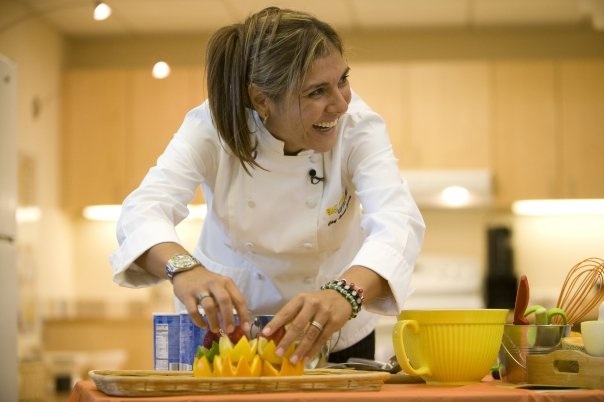 You may have seen her in the Taco Bell commercials, or perhaps Bravo TV’s “Top Chef Masters, ” but one thing’s for certain: Chef Lorena Garcia has now made it to the center stage of the American spotlight. No stranger to the media, Lorena and her cuisine, cookbook New Latin Classics and restaurants Lorena Garcia Cocina,and LorenaGARCIA Tapas have been featured in major magazines and TV networks including CNN, NBC, Bravo, and Telemundo, just to name a few.

Adding to her list of impressive achievements, Lorena launched “Big Chef Little Chef” – a program dedicated to help children and families take control of their health and combat obesity through workshops and hands on cooking classes.

Can you imagine this charismatic and creative force once had a completely different career trajectory? It was fascinating to learn that she earned her law degree and was continuing in her education when she had a personal epiphany that caused her to completely switch gears and explore a new future in the culinary arts. She enrolled at Johnson & Whales University and never looked back.

Recently I had the pleasure of having dinner with Lorena, Randy Jackson, Harriet Sternberg (who incidentally is on the Women A.R.E. advisory committee), and Lara Shriftman. As I had suspected, Lorena has an effervescent personality and was brimming with excitement about the new venture on her horizon. Lorena is so comfortable with herself that one can easily fall into friendship with her. She talks about the experience and ritual of food, as if she were giving a impromptu workshop on personal growth and relationships. No wonder she has a strong following worldwide!

Women A.R.E. is pleased to have chef extraordinaire and culinary artist, Lorena Garcia, as a participant on the “Women in the Arts” panel at the November 7th Summit.