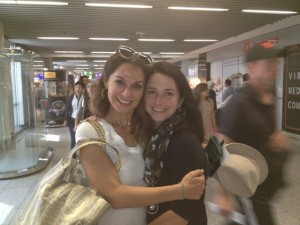 It doesn’t matter that I have not been a student for two decades. Still, when summer rolls around, I feel like I have been let out of school and it is time to relax and enjoy the beautiful sunny days. No doubt, summer is also about travel and exploring new places. This past month, my travels took my family and me to Berlin, Israel, and South of France. Each country has such a different flare for living. Berlin to me is the center of what is up and coming in the art world—a young and vibrant city. Israel, on the other hand, feels ancient and spiritual. And what can I say about the sunny beaches of Cot d’ Azur—the beautiful coastline, the marvelous food, and the medieval villages are feasts for the senses.

But the most exciting part of my travel actually took place in transit—on a short layover at the Frankfurt Airport. Well, you might say, she has lost her mind! How can an airport terminal be more exciting than the list of places I had just mentioned? Comes to show you that people are the essence of what makes something truly memorable.

You see, from the time I was eleven until the age of 22, everyone thought I had a twin. Well she didn’t look like me at all. She had light brown hair and fair skin and she was half German and half Persian—A very exotic combination, don’t you think? Shirin was my dearest friend all through my growing up years. We did everything together! No one would see one without the other and when we were 13 years old, we went to a store to get our BFF charm for each other.  She was my maid of honor at my wedding as well.

Shirin happened to fall in love with a dashing guy in Germany and permanently moved there 18 years ago. She came and stayed over a couple times with her family over the years but for the last decade we lost touch. That is until this past year! We have been updating each other through facebook and once she learned that my family was traveling to Berlin she wrote, “we have to find a way to see each other.” These were my sentiments exactly!

Shirin took off work and met me during my transit at the Lufthansa gate in Frankfurt. Words cannot describe the avalanche of excitement in both of us. Laughter broke out as we both rushed to hug each other. The next hour and a half was spent over coffee, catching up with each other.  It was uncanny, it seemed like no time had gone by. We talked and laughed and cried as if we were those two eleven year old girls joined at the  hip in grade school. Only difference is that we had this illusion that everything around us is older—older kids, parents, siblings, and spouses. It is really hard to pluck yourself out of yourself to see who you are after some odd 25 years. But most definitely the core of who we are really remains the same.

Oh, by the way,  there was one other thing that was different between us. We both had premature gray hair in our twenties even. I started highlighting my hair and she started dying her hair a deeper shade. To think that I now have lighter hair than her is quite amusing! What a truly heart-warming hour we spent together, and it was so hard to say good bye.

Wishing you a sun-filled and beautiful month of July!