Every year I look forward to going to NY to attend the Women in the World Conference. Tina Brown packs the two and a half days at the Lincoln Center with the most compelling stories and women change makers. For someone like me, who writes, lives, and breathes these topics, it is one of the most interesting venues to attend.

I want to share with you some of the highlights from the conference: 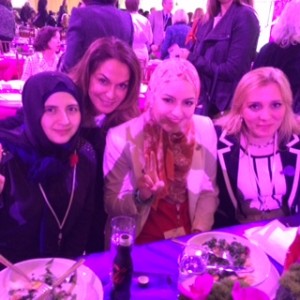 I had a chance to meet two Syrian women (Hiba Sawan and Rania Kisar) who are activists in their war torn country. Their story of saving victims of bombing and war was incredibly touching and I had a chance to sit next to them at lunch.

Who can forget the in-depth conversation between two of the most powerful women—Hillary Rodham Clinton and Christine Lagarde. The moment where they high-fived one another was caught on camera and was in the news the very next morning. Funny enough, I ran into Christine Lagarde at the Carlyle hotel and enthusiastically went over to congratulate her on her inspiring talk. She is not only brilliant and fearless, but chic and approachable. 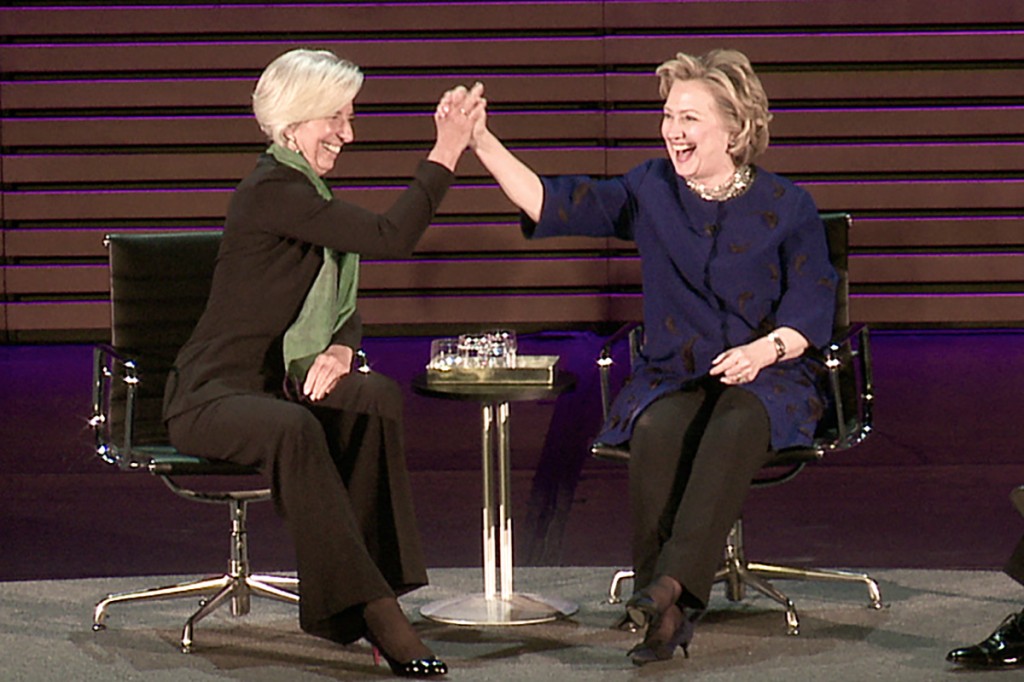 The list of impressive presenters continued: Lorene Powell Jobs moderated a panel on education; Jimmy Carter made a passionate case on behalf of women and girls in his new book, “A Call to Action”; the comedian, Sara Silverman and her sister, Susan, who happens to be a rabbi talked about their shared spirit of activism (by the way, Susan is as funny as Sara); the list went on. 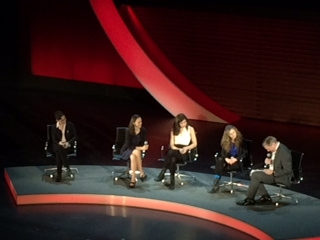 Of course, one of the highlights was listening to the experiences of Masha Alekhina and Nadya Tolokonnikova of Pussy Riot. To think that for months we were following their trial and tribulations in Russia and they were onstage talking about their new NGO, Zona Pravda.

I came back to LA brimming with ideas and thinking about the women who I would like to write about in my next book. Stay tuned: I will have a surprise story of a brave-hearted “untouchable” woman that I want to showcase in the near future.

It is one thing to research and study the life of a person you admire and quite another when you get to see them face-to face and collaborate.  I had first met Somaly Mam, CNN Hero—and one of Timemagazine’s ‘Top 100 of the Most Influential Women in the World’, six years ago. She took the stage at the Governor’s Conference and had her speech had all 9,0000 women in the convention center simply rapped.

Today, Somaly Mam is a shining example of love, resilience and courage. She has transformed her painful history as a child who was sold into sexual slavery and who eventually broke herself free to rescue others. She and others fromThe Somaly Mam Foundation risk their lives continually to go into the dark hidden places where young girls are locked up, help them escape and provide a safe haven for them to rehabilitate. For me, these are true heroes.

One of my favorite speaking topics is about the power of one person. One person, or small group of likeminded individuals, can accomplish anything. Likely, they have more power than mega-organizations. And Somaly Mam is one of those people who, single-handedly, has brought sex trafficking to a global platform.

When she came to Los Angeles for work in early November, I invited her to a small afternoon tea with a few of my close friends. What touched me the most from our time together was the deep level of joy and love she radiated. All the guests that afternoon walked away feeling uplifted and utterly moved by the gracious presence of this woman.

I tend to believe that one of the most powerful ways to unleash the potential a group of people is to hold salons and conferences, where ideas, issues, and experiences can be discussed in a meaningful way.

A quote by Margaret Mead comes to mind:

“Never underestimate the power of a few committed people to change the world.”

Invigorated by this simple truth, I along with my partner Beth Friedman, decided to organize a formal salon as a platform for Somaly Mam to share her story with a broader audience. The response was overwhelming. Press came, donations were given, and even one woman I heard contacted Somaly’s organization to replicate their operations in another country. Truly the power of one life, of one story, Somaly’s, yours and mine, has the ability to impact the world!

Continuing on this theme, Beth Friedman and I have co-founded Women Aspire. Respond. Engage. (Women A.R.E.) and we will be hosting our inaugural day-long conference on November 7th at the SLS Hotel in Los Angeles.

Below is a sample of the discussion at our first Women A.R.E. Salon.

Before heading to the Grand Hall for my speaking engagement at Rice University, I had to make one stop! I simply could not visit the majestic Rice campus and not stand underneath James Turrell’s “Twilight Epiphany” Skyspace.  James Turell medium of art is light, and he has always said, “light itself is a form of revelation and a source of contemplation”. Of course as I watched the light show in the skyspace pavilion, I was filled with a sense of expansiveness that was indescribable. 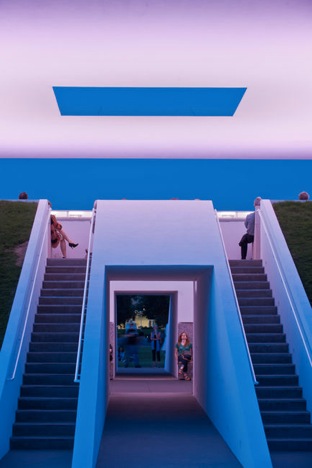 As lifelong learners, we also hope to experience those “light filled” moments where we gain new insight on life and people. One of the ways in which we all can play a part in transformation is by sharing what inspires us. Given my natural curiosity and my training in psychology I have always been fascinated by visionaries, who have been at the forefront of change, who have led the way to a broader way of perceiving the world.

This fascination led me to write “Pioneers of the Possible: Celebrating Visionary Women of the World”. In the book, I offer a personal and psychological narrative of the most trailblazing women around the world.  My quest to connect and have meaningful conversations about this topic has led to a yearlong book tour, which is why I was invited to come and speak at Rice University.

It is one thing to go to an institution and talk about what I am passionate about, but it is another thing to see that an institution can so thoughtfully integrate a talk and link it to their students’ passion.  For my speaking engagement, The Center For the Study of Women, Gender, and Sexuality brought together 20 non-profit organizations (AssistHers, YWCA, Girls Inc., The Women’s Home to name a few) to its Grand Hall so that students could sign up to volunteer for these organizations following my talk.

If there are two messages that I can impart about my book, it would be that effective leaders 1) build a life around their strengths and 2) visionaries commit themselves to a purpose that is larger than themselves.  The idea of service is pivotal in one’s growth and transformation, and how appropriate it was for an educational institution to facilitate growth in such a thoughtful and meaningful way.

Perhaps the Turell piece that I so wanted to visit is just another symbol for what the campus does already.